Polycystic ovary syndrome, or PCOS, is an endocrine condition in which a woman has an imbalance of  female sex hormones. This may lead to menstrual cycle changes, cystic ovaries, trouble getting pregnant, and other health changes. It is estimated that more than 1 in 10 women have this syndrome. Since the symptoms can vary, many do not suspect that they have PCOS at all. It can manifest itself in young girls and cause problems up through menopause. PCOS is one of the leading causes of infertility and there are specific ways to approach this issue as will be discussed below. There is no cure for PCOS but it can be managed with the help of a skilled, knowledgeable physician like Dr. Ramirez.

The exact cause of PCOS is not understood. Some thought it was elevated insulin, but that clearly is not the case in all patients. Some thought it was increased weight, but that also is not the cause. It is clearly some inherent pathway within the ovary that is dyfunctioning, and it is clear that there are many forms of this disorder. It may be a multi-factorial condition where there is not one presentation or one treatment. It is imperative that patients and physicians understand this and not latch onto one treatment modality for all. Treatments have to be specific to the patient.

Common symptoms of PCOS include:

For non-insulin resistant patients the treatment varies, depending on whether a patient is trying for pregnancy or not. For those who are not trying to get pregnant, the dominant male hormones have to be suppressed, female hormone needs to be increased and the patient needs to have regular cycles. This is done through the use of birth control pills because it does all of the above. At the Fertility & Gynecology Center, there is a specific low-dose birth control product that we use which has proven quite effective.

One of the most important topics concerning PCOS patients is the question of “insulin resistance” as being the main cause of polycystic ovarian syndrome. This has led to many, many women being misdiagnosed and mismanaged. As a result, there has been a tendency to automatically prescribe Metformin (Glocophage). In reality, only 30-40% of these women have insulin resistance, and only those patients will have some response. Some will resume normal ovulatory function, and others will respond better to fertility medications. It will take 6-8 months to see if the medication works and a specific dosage per day is required.

When is it appropriate to go this route with a patient? The patient must be evaluated for insulin resistance. This is going to be manifest by an elevated fasting insulin blood test, or abnormal glucose tolerance, that is, when the fasting glucose is elevated, a glucose tolerance test is positive or there is a diagnosis of diabetes. In these cases, the insulin level may be low or normal because the long-standing resistance has caused the pancreas to stop secreting insulin. If a patient is not insulin resistant then Metformin or similar medications are not indicated. 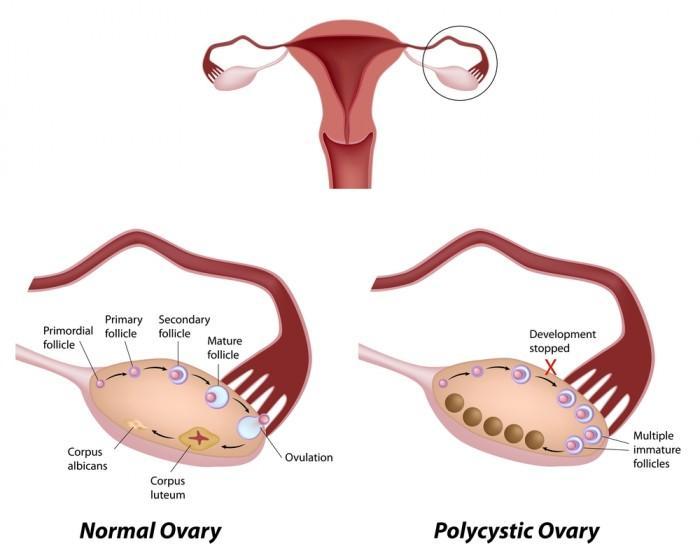 The basic problem with PCOS (polycystic ovarian syndrome) is that the ovary does not function correctly and therefore does not ovulate on a regular basis. Therefore, any infertility treatment that you do will require that you take fertility medications in order to induce the ovaries to ovulate.

Dr. Ramirez may begin by doing intra uterine insemination cycles with this kind of patient. With IUI the goal is to have the patient ovulate three eggs per month (that is what increases the pregnancy chances). Ultrasound is then used to gauge her progess and time when the insemination should be performed. Basically, when the ovulatory follicles reach appropriate ovulatory size (18-24 mms), then a trigger such as HCG is given to trigger ovulation. Dr. Ramirez does two IUI’s at 24 and 48 hrs from trigger but some clinics will only do one IUI at 32-26 hrs. There are pros and cons of each and but he believes that two IUI’s are better despite the fact that studies have shown that they are equivalent. With natural treatments like IUI we don’t allow more than three ovulatory sized follicles because we cannot control how many get to the uterus, which would increase the risk of a super-multiple such as 5, 6 or 8 implanting. If the patient does not achieve pregnancy by four attempts, then the pregnancy rates decrease dramatically so it is recommended to proceed to IVF from there.

One of the difficulties with PCOS patients is that their ovaries are very difficult to stimulate, so that many (80-85%) do end up proceeding to IVF. With the simple medications such as Clomiphene or Letrozole, many PCOS patients do not stimulate at all despite the highest dosages, whereas, with the injectables (gonal-f, Follistim, Bravelle, Menopur), they tend to stimulate too much and produce too many eggs (many of which are immature) necessitating cancellation of the cycle.  This is a situation all patients most certainly would want to avoid! Dr. Ramirez has treated many PCOS patients successfully. He has developed a specific medication protocol and monitoring system that is tailored to each patient helping her to ovulate appropriately. The goal is to have the patient ovulate mature follicles during her IVF cycle. Another advantage  of  doing IVF is that it also gives the physician full control over how many embryos are transferred, much of which depends on the age of the patient.

Ovarian hyperstimulation syndrome (OHSS) develops after you take a type of fertility medication that acts directly on your ovaries, stimulating them to produce multiple eggs. Patients with polycystic ovaries are especially vulnerable to this syndrome. Typically, signs and symptoms of OHSS appear within the first 10 days after a gonadotropin injection, when the ovarian blood vessels have an abnormal reaction to the hormone and begin to leak fluid. This fluid fills the follicles, swells the ovaries and sometimes moves into the abdomen in large amounts. Fewer than 2% of women develop the most severe form of OHSS. There are measures/protocols an infertility specialist can take to reduce the chances of developing OHSS such as “coasting” using “antagonist + Lupron to trigger” and lowering the dosage of stimulation. Careful, daily monitoring of the patient is also advised.

In 2010’s January IVF cycle we had a patient with PCOS at our center who had undergone IVF at another clinic in the Bay Area. There she developed severe, life-threatening OHSS, was admitted to the hospital and stayed there for seven days. Needless to say, that cycle failed. She returned to the same clinic to do a frozen embryo transfer, which also failed. She then came to see Dr. Ramirez. He put her on his standard protocol for PCO patients, low dose stimulation (Lupron/Ganerelix) and carefully monitored her. We are proud to report that this patient had no adverse reactions and became pregnant, delivering a baby boy nine months later after only her first cycle with us.

There is a lot of support and information on the internet for women with PCOS. Listed below are a few that can help: