“The men and women in our armed forces go where our nation’s leaders direct them, serve in difficult and often dangerous conditions and do so with admirable dedication and professionalism. As a nation, we owe them our freedom. When they are wounded serving their country, we have an obligation to care for them and to strive to make them whole again.”  Rebecca Z. Sokol, MD, ASRM President, from an Op-Ed published in the Baltimore Sun Oct 19, 2015

As a veteran and currently serving in the Army Reserves, Dr. Ramirez is proud to join in this call to action in support of our Veterans who need to have IVF (in vitro fertilization) in order to fulfill their dream of having children. Our center has agreed to provide deeply discounted IVF treatment cycles to those veterans whose service related injuries damaged their reproductive systems.

As a member of both ASRM and SART, we believe that the United States government ultimately should bear the burden of making its service members whole again. This program is designed to be temporary and will expire when Congress does the right thing and lifts the ban on IVF services through the VA or when the 114th Congress adjourns in 2016, whichever comes first.

**UPDATE: As of September 30, 2016, Congress passed legislation “…allowing the VA to cover in vitro fertilization costs for the first time in 24 years. But it falls short of the ultimate goal of advocates – permanently lifting a 24-year-old ban on VA coverage of IVF — and comes with some caveats. It provides no specific dollar amount to pay for the procedures and expires after two years, according to a key sponsor, Sen. Patty Murray, D-Wash.” Stars and Stripes, 9/30/2016

If you haven’t heard of “HealthTap” please visit and join this very useful website staffed by thousands of physicians of all specialties who answer questions 24/7 via the website and mobile app. Dr. Ramirez has been volunteering as an expert physician advisor on “HealthTap” since 2012. Not only has he been given “Featured Writer” status, but he has also recently been honored by Dr. Geoffrey Rutledge (Chief Medical Officer of HealthTap) with the Top Reproductive Endocrinologist in California Award in the Winter 2013 Top Doctor Competition. This award recognized Dr. Ramirez for helping 146,610 people on HealthTap, and represents the highest recognition for his expertise and helpfulness. When you join this app you can add yourself as a patient of Dr. Ramirez’s on his profile as well!

Dr. Ramirez won the 2015 “Top Expert” award for the eighth year in a row in Infertility. The award is given to those who earn the most amount of positive votes from the public world-wide who rate the volunteers after their questions are answered. Since he started in 2008, Dr. Ramirez has answered over 4 thousand questions and earned an average rating of 9.9.

AllExperts.com, created in early 1998, was the very first large-scale question and answer service on the net! With more than 2 million questions answered, AllExperts.com is the now oldest and largest FREE Question & Answer website on the internet. Dr. Ramirez has been volunteering and answering questions on infertility and gynecology from men and women all over the world since 2008. Some of the most relevant Q&A are published on his blogs.

Fertility Authority Video: “What are Stimulation Strategies for PCOS Patients?”

How do stimulation protocols differ for patients with PCOS? Dr. Ramirez was recently featured in a PCOS Video filmed by Fertility Authority in which he explains the stimulation strategies for women with polycystic ovarian syndrome. One of the doctor’s specialties, he goes in depth on the treatment protocols for PCOS in conjunction with fertility treatments. Filmed on October 22, 2012 at the recent American Society for Reproductive Medicine meeting in San Diego, California.

Dr. Edward J. Ramirez, MD., FACOG, medical director of The Fertility and Gynecology Center, Monterey Bay IVF, is proud to announce that his center has received two prestigious accreditations. The on-site ambulatory surgery center has received a three-year accreditation from AAAHC (Accreditation Association For Ambulatory Health Care) demonstrating the center’s commitment in providing safe, high quality services to it’s patients. In addition, Monterey Bay IVF’s embryology laboratory, with laboratory director Lisa Nelson, MS, has successfully met the rigorous standards set by the Reproductive Laboratory Accreditation Program by CAP (College of American Pathologists) receiving a 2-year accreditation. Meeting the “gold standard” of laboratory and surgery center accreditations is a result of the commitment to excellence made by Monterey Bay IVF and it’s staff. Monterey Bay IVF is the only In Vitro Fertilization program available to infertility patients between Los Angeles and San Jose and offers comprehensive assisted reproductive care. The center’s staff is deeply committed to courteous, responsive and personal care. Monterey Bay IVF is conveniently located in the Laguna Seca Office Park, off Highway 68, at 9833 Blue Larkspur Lane in Monterey. For more information please call for an appointment: (831) 649-4483.

Whereas our brand new website now has a blog, you should also visit Dr. Ramirez’s first blog, “Women’s Health & Fertility” where there are hundreds of posts covering all aspects of women’s gynecologic and fertility health. Since 2008, he has posted over 300 entries in a question and answer format.  He has discussed and advised a world-wide audience on many issues regarding women’s health, ranging from menopause to in vitro fertilization. Using the search box, you as well as his readers can search for almost every issue regarding women’s health and fertility. In 2015, the “Women’s Health and Fertility” blog reached a milestone of a total of 650,000 hits. It presently averages over 400 hits per day from women and men all over the world. In 2010, he was awarded the “Creme De La Creme” blog award by Melissa Ford of “Stirrup Queens”, a well known blogger and infertility advocate.

“The Real Deal About PCOS and Fertility”

On February 24th, 2010, Dr. Ramirez was interviewed by Washington D.C. blog radio hostess, Sasha Ottey, of PCOSChallenge.com. Please listen to this interesting one-hour interview covering all aspects of Polycystic Ovarian Syndrome. Who is a typical PCOS sufferer? What is insulin resistant PCOS? How should it be treated and what are the chances for pregnancy if you do suffer from PCOS? All these questions and more are answered during this recent interview.

“Eight Tips On How To Boost Your Fertility” Published in EzineArticles.com

As Featured On EzineArticles October 19, 2009

Doctor Ramirez recently wrote an article regarding how to best improve your fertility, targeting couples who are trying to conceive or who may be thinking about it for the near future. Some of the more important tips have to do with “Age”, “Timed Sexual Activity” and “If All Else Fails..”. Click here to read more.

Dr. Ramirez, together with embryologist Lisa Standing and the staff of the Fertility and Gynecology Center/Monterey Bay IVF, were pleased to welcome the public to their Open House celebrating their new location on Larkspur Lane. The doctor was presented a special commemorative certificate from the Monterey Chamber of Commerce who graciously officiated the ribbon cutting. Dr. Ramirez and his daughter did the honors by cutting the ribbon, officially welcoming all to the celebration!

Please enjoy the photographs from the event. We were pleased to see so many patients come with their beautiful babies! One special couple, with a baby on the way, were the lucky winners of the grand door prize of a Nintendo DS!

We wish to thank the Chamber of Commerce, our many patients, our great pharmaceutical and pharmacy representatives and the general public for their good wishes.

Some pictures from our Open House in 2008: 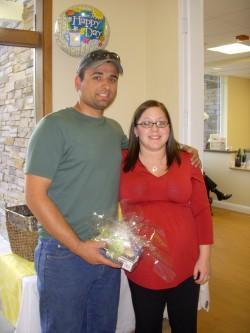 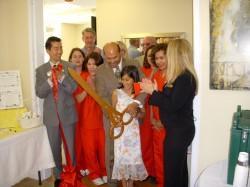 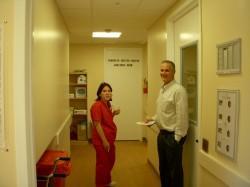 After 14 years in Salinas, at 212 San Jose Street, our center relocated in the Spring of 2008 to the beautiful Laguna Seca Business Park right off of Highway 68, between Salinas and Monterey, less than two hours from the Bay Area.

Wishing to improve health care for his patients, Dr. Ramirez realized his dream of a brand new facility and moved into a two-story facility of his own design and specifications. Another benefit was its convenient location, right off of York Road, in the Laguna Seca Business Park. The brand-new home of the Fertility and Gynecology Center was finally centrally located between Monterey and Salinas, only minutes from the Monterey Airport. He and his staff were proud to offer the benefit of a state-of-the-art surgery center and embryology facility for Monterey Bay IVF downstairs, with a modern, comfortable doctor’s office and clinic upstairs. It is the only full spectrum infertility center on the Central Coast of California.

Dr. Ramirez and his staff are looking forward to welcoming all our new and old patients to our center. A wide range of services are offered, including, gynecology, infertility evaluation, advanced laparoscopic surgery, artificial insemination, male infertility treatment and in vitro fertilization. We will continue to offer excellence in healthcare with one-on-one patient relationships in a comfortable, stress-free surrounding

Television interview with Dr. Edward Ramirez on the Heartbeat of America, September 2007

A 30 minute, in-depth interview with Dr. Ramirez on William Shatner’s syndicated show regarding his work in infertility. Well known television personality, Doug Llewellyn, asks pertinent questions regarding the infertility patient, the IVF process and Dr. Ramirez’s practice at the Fertility and Gynecology Center.”