Dr. Ramirez is currently serving with his Army Reserve unit, 352nd Combat Support Hospital, in the Dominican Republic as Chief Medical Officer. As a Lt. Colonel in the reserve medical corps, he is an integral part of the U.S. Southern Command joint task force humanitarian civic and medical mission “Beyond the Horizon”. He has texted us here at the clinic: “It has been an overwhelming experience to see over 300 patients a day, many of whom come on foot from Haiti, seeking medical care…our team is dedicated to giving them the medical care and advice that they sorely need.”  This two-week mission includes military medical doctors, dentists, nurses and lab technicians from both the United States and Canada, all pulling together to make the mission a success. 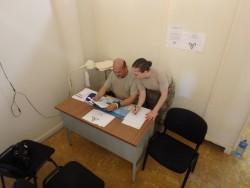 From March – August 2016, U.S. military personnel will deploy to the Dominican Republic and Guatemala to conduct humanitarian and civic assistance exercises.  As part of the Beyond the Horizon & New Horizons exercise programs, troops specializing in engineering, construction and health care will provide services to communities while conducting valuable deployment training and building important relationships with partner nations.

Since 2014, as an example of cooperation between partner nation countries, including Canada, Chile, Colombia, the Dominican Republic and the U.S., participants in Beyond the Horizon-Dominican Republic have embarked on a campaign of medical tours and construction projects over a four month period.  “Our theme is ‘people helping people,'” said Brig. Gen. Orlando Salinas, U.S. Army South deputy commanding general. “The people we’ve helped during this exercise may not remember our names, they may not remember our faces, but they will never forget that one day service members from different countries came together to help them.” U.S. Southern Command

Serious Health Effects of Menopause and How to Avoid Them

Menopause is a major life transition that can have profound effects on your life. Learn about the serious health risks associated with menopause and how to avoid them.

Your annual well-woman exam has so many benefits. Learn more about 7 of the biggest rewards you can get from such an exam.

Genetic testing isn’t just for people who have known problems. Learn why everyone can benefit from genetic testing.

All About Intrauterine Insemination (IUI)

Intrauterine insemination is a procedure that improves your chances of conception. It places semen directly into the woman’s uterus.