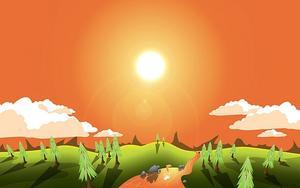 I am a 40 YO who has never had any trouble conceiving. I've been pregnant seven times. I had a child when I was 37; all went fine.

My husband and I are TTC (trying to conceive). GYN did an AMU (.86) a year ago. He said there was little hope. Nevertheless, I was pregnant in January, but the CVS @ 11 weeks revealed a double trisomy (13/21). We terminated the pregnancy.

Beginning with that particular pregnancy I have experienced pronounced pg symptoms within days of fertilization. They are symptoms I would expect to arise @ 6 weeks. I have had these symptoms each month when my husband and I try (with the exception of one month). My assumption is that I am experiencing hormone surges, but I have my period on time, and I have not had a positive urine test. I have tried a "control month" of abstiinence, and there were no symptoms. Also, no symptoms one other month (although we had tried).

I had a hormone panel on day 3 of my cycle, and another when I had begun to experience the nausea, tenderness, food aversion, fatigue, etc. GYN reported that the baseline was totally normal (FSH 3 and all other #s in range). The second test indicated that levels had changed, but still in normal range and not consistent with pregnancy. He has no explanation for these symptoms U/S's have been clear. No cysts or fipoids.

I did not experience these symptoms with my daughter or any other pregnancy.

I began taking lamictal in 09 150mg daily and .5 Klonopin daily. The addition of these meds and age are the only variables. My dx is Bipolar 1. I have found no research that supports either medication as interfering with implantation. The genetic counselor said the meds are a nonissue.

I have wondered if perhaps the procedure with the trisomy situation has harmed me somehow. My GYN said I never should have been able to implant an egg so defective.

So it seems, now, I will continue to experience these incredibly uncomfortable symptoms every time I fertilize an egg although my prospects for implantation seem dismal. I get all the bad stuff and hope for a good result that doesn't materialize.

Any words of wisdom would be appreciated. Thanks, S. from California

Your symptoms are confusing and not easily explained. First, you cannot tell whether or not fertilization takes place. That occurs within the empyo and nothing within the body is changed at that point. You would not have symptoms. It is possible that the symptoms you are having are "hormonal shifts" or physiologically the result of the rise in progesterone in the luteal phase. Why would you be more sensitive to this now than before? I can't clearly explain that but you are also older now than you were before so maybe that had something to do with it. Normally, the pregnancy symptoms don't begin until weeks after implantation occurs, so it is unusual. But the progesterone is the culprit for PMS (premenstrual syndrome) which does have some of the symptoms that you describe. I don't think it was the D&E (dilation and evacuation).

Your doctor is right and wrong about the trisomy. It is well known that age is a significant factor and leads to increased numbers of empyos with chromosomal abnormalities. This leads to infertility and increased miscarriage rates. In most cases of complex or multiple abnormalities, the empyo never gets to the point of implantation. But if the defect is not significant enough, as in trisomies, implantation can occur but then most will end in miscarriage. Few will continue to the point where genetic testing finds the abnormality but they do occur.

As you continue to attempt pregnancy you have to remember these facts. Due to your age, it will be more difficult for you to get pregnant, you have an increased risk of miscarriages and an increased risk of abnormal empyos. Aside from your one successful pregnancy, you note that you have had six that miscarried which is troublesome. You have what we call "secondary infertility". Since there is no technology that can change the quality of your eggs, the only way to increase the chances of a successful pregnancy in older patients (over 35 years old), is to increase the number of eggs that have the opportunity to implant. This is done by increasing the number of eggs that ovulate (superovulation) or through IVF (even higher numbers of eggs). In addition, with IVF, genetic testing can be done on the eggs to eliminate the ones that are genetically abnormal so that only normal empyos are transferred. This is just food for thought.

I hope I was able to ease your concerns.